Jeff Rients' famous 'carousing table' has seen a lot of use in my game, as has Zak Smith's jazzed up interpretation. Here's a version specifically for wizards, meant to simulate magic experimentation of the general kind...the sort of thing I think your party magic users are going to get up to, rather than the drinking and whoring of the original versions. I guess they could still use the other tables depending upon the circumstances.

Ultimately, I intend to create a similar table for clerics, who, when it comes to carousing, are probably an even bigger source of cognitive dissonance/ice cream head ache. I'll get round to that eventually. You've probably noticed my production rate approaches the glacial. In the meantime: 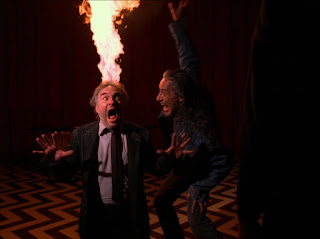 Wizard's Wizardly Activities Table
1  Insult high ranking local magus. Hard charisma check. Failure, you gain this wizard as an enemy. Also he/she sees to it, that you'll be learning no spells from any 'official' sources in this area. Success and the magus lets it go, though he/she may tap you up for an adventure sooner or later. Respect will do that.

4 Doppleganger. A perfect double crawls out of your arse. It becomes your implacable enemy, opposing with equal force, every scheme you undertake. Killing it only hurts you (gain a random insanity and it comes back the next night). Got to to find some more mystic technique.

5 wild magic infection. The next time you cast a spell, roll a d20. On a 1, roll on wild magic table/magic mishap table of your choice. This occurs until you purify yourself in some reasonably cool manner.

6 Magic disease. You contract a magical disease. There are loads of these knocking around various sources. Here's three for you.
1: Object lycanthropy. turn into a particular, randomly generated household object every full moon. can still talk and cast spells.
2: Royal Swell. Slowly become huge, pseudo-berry. Multiply your Con by 0.5 THat's how many days it takes to turn into an immobile ball full of blood juice that attracts a certain kind of blood drinking moth (capable of passing on disease). Turquoise Sphere Moths, I reckon.
3. Phase Instabilty. Every time you enter a stressful situation, make a CON save/save vs magic. Failure means you become ethereal and cannot interact with the wolrd for d3 hours. You take d6 hp when this occurs. If you die due to this, you become a spectre. You also become visible to a peculiar kind of astral predator that enjoys haning arounsd wizards, the Wetiko. Let's say they're kind of like wolves, except they look like transparent, dog sized mole-lampreys.

7 Summon outsider with your blasphemous mirror gazing. Roll a d10 1-6 lesser demon/angel, 7-9 greater demon 10-aspect of a demon prince. Check reaction table. If good, it imparts to you an ancient demonic language that everyone will get hot and bothered about. Neutral and it turns up to offer a pact of some kind. Hostile and, well...

8 Offend a god. God turns its clerics against you in visions.  Will keep meddling with you like Hera in Clash of the Titans, you're just a piece on her chess board baby. You better make reparations somehow. Select the god from your pantheon randomly.

9 Haunting. Yes you've managed to attract a 1-ghost 2-spectre 3-poltergeist 4-lesser demon 5-wraith 6-shadow. It's now going to haunt you and mess with your stuff/affairs, until it is successfully exorcised or its needs are met.

10 Reality damage. You completely fuck the area in which you were working. It's now a portal into infinite chaos and nothing works as it should. Indeed, the portal eats at the threads of reality, growing steadily bigger, until an army can get through (say).

12 Join a brotherhood. Who's it gonna be? 1-John Godwin Society (Anti-aristocrat judge, jury, executioners) 2-Glommers (Like Masons except they like to form into a big giant and go rampaging across the countryside) 3-Cult of Woe (Worship apocalyptic sentient sun from other dimension, really into patterned garden arranging) 4-The Yoon Suin Society (Dedicated to preserving monopoly on far-Eastern trade) 5-The Inverted Eye (Secret theurgic police dedicated to the banning of sorcery and the severe punishment of those that do practice) 6-The Black Bugle (Carry secret mail of varying kinds across the continent, always dangerous,seditious, mind rending).

13 Failed experiment. You created something awful.
1-Rampaging, headless flesh golem
2-An area of space that leads into an endless abyss, the portal invisible.
3-Hyde, turn into genius ogre under DM control when you get drunk, have sex, learn a new spell. 4-Accidentally create super addictive food stuff that is actually toxic, like sugar but much worse. Yes, it's been stolen.
5-Turn all the grain in 5 mile radius into lead pellets
6-Unleash d30 random molds
7-Begin to shrink first by an inch, then doubling each day.
8-Swap heads with nearest animal.
9-Create a multi-dimensional meme that cannot be grasped. Lose 1d3 charisma, you can't stop talking about it and failing.
10-Touch turns everything into electrum.
12-You create a crystal fractal which begins to eat up the world, growing by 1 foot each day. THrough the crystal, the world is being recreated, the process like a hall of mirrors continuing endlessly
13-sex change
14-create ambitous familiar thing which likes to cause misery for cosmic status. If it dies, so do you. 15-your thoughts are exhaed from your ears in a silvery liquid each night. Drinking this liquid allows someone instant knowledge of your toal being.
16-Unleash d30 random oozes
17-Trapped in Astral body. Connected by cord. Can never leave 30 feet of body. It will not wake up. 18-Blow up lab. Take 6d6 damage and are badly scarred, lose 1d3 CHA
19-Blow up neighborhood, kill d100, take 8d6 damage and ae badly scarred as above.
20-Wake up and you've plucked out your eyes. You're now blind. Also, take 4d6 damage.

14 Marked by the Church. The Church or a particular branch of the Church that hates wizards, has now marked you as a diabolist/heretic. Whether or not they move against you, depends upon your social class. Only nobility are able to avoid an immediate arrest attempt.

15 Start a religion. Your notes fall into the hands, of a small circle of hard-core loons. They use them to create a new religion, with you as the L.Ron Hubbard figure. Roll one of your spells randomly. this spell serves as the fundamental, theological underpinning of the religion. For example, Charm Person suggests 'Love Thy Neighbour', Fireball suggests 'Purify Corruption with Fire', Animate Dead 'Dead Flesh is Holy' and so on. This congregation will interefere in your adventures on a roll of 1 on a d6/session. They will ultimately hold you to their own strict interpretation of your research notes/new bible.

16 Offend the community. Peasants now regard you as a monster. They shun and fear you. Advantage on Intimidation checks. Disadvantage on all other social rolls. They will usually blame you for generalised mishaps in their lives...milk curdling, still births, bad harvests, sock puppets...you know the drill.

17 Attract apprentice. Awesome, a level 0 apprentice starts pestering you for teaching. You must give 10% of your earned XP to this apprentice (assume level 1 is reached at 500 xp). They will develop as any normal henchman, possibly growing to love you, possibly growing to hate you. You must teach them 1spell per level (and pay for it as if you were learning yourself), else they leave your tutelage and spread slanderous shit about you wherever they go.

20 Dweomer mutation- One of your spells undergoes a random d/evolution. See Here and here.